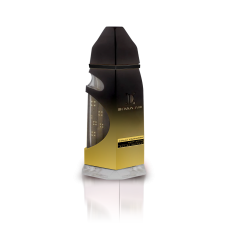 Merlins are mysterious and philosophical,very distinctive among the falcons. There is a black streak running through the centre of the feathers on the upper parts, and its light reddish-brown chest has large, dark brown speckles. Merlins rely on speed and agility to hunt their prey. It often hunt by flying fast and low,typically less than 1m

above the ground,using trees and large shrubs to take prey by surprise. Despite their small size, Merlins look powerful in flight;they flap their wings faster than Peregrine falcons. Merlin is a strong and manoeuvreable flier which will readily attack anything that moves conspicuously.

DIMAND concealed the mystery of a Merlin in a bottle and named it EmaurriFALCON Eau de Parfum as it means work­ power in French. Every mist of luminous concentrate of

aoud is spiritual after which develops to an intense base of Aoud and Oakmoss.