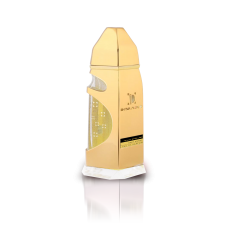 A slim-bodied raptor with longish wings and tail,the Aplomado falcon has distinctive head markings,comprising a white band running above the eyes,meeting at the back of the head. They often hunt in tandem, especially when hunting birds. When the male spots a distant prey from its perch,it initiates the attack and usually the female follows it. But if she does not move,the male calls her. The female may also flush out birds from bushes and pursue them while the male hovers just above. A swift and agile flier,the Aplomado falcon employs a variety of hunting techniques and takes a wide range of prey.

As skillful as Aplomado Falcon, DIMAND chased a fragrance that gives assortment of flavors into Apolline FALCON Eau de Parfum. . Apolline is a luscious French name chic in Paris, derived from the mythological name Apollo who was the god of sun and light. Can also derived from the French word appel which means 'call' or also from Indoeuropean element apelo that means 'strength'.